One of the funniest posts I ever made, imho, was this one about the Olympia Food Co-op t-shirt policy. Well guess what? This is a follow-up post. If you haven’t read that one, and it’s from June 2003 so many of you haven’t, go read it. I’ll wait.

Ok, now that you’re up to speed we can continue.

Back up in Olympia a couple of months ago I was wandering around the backstock area and found a handout to help explain the t-shirt policy to the poor hippie boys who can’t seem to find their t-shirts. I thought I had lost it after showing it to everyone whose path I crossed driving cross-country. But cleaning out my wallet, I just found it again and scanned it for your reading pleasure. Here it is: 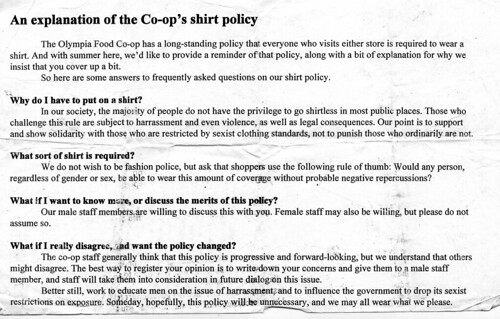 I don’t honestly know what else I can add. Except to point out that the reason we don’t allow* un-clothed folks is that we’re a food store and that is gross. Keep those underarm hairs and pointy bits out of the bulk section!

My favorite part is the "don’t assume that just because the female staff is being paid to work here, that they will answer your questions". Second favorite: "We do not wish to be fashion police". Third: "Someday, hopefully,… we may all wear what we please." I know that’s what I’m fighting for.

My friend is going to hate me for this.

*Close readers will notice that an occasional pants-less junkie or street fest attendee may wander in. But we do kick them out or ask them to clothes-up if we see ‘em.

Many of you know my feelings about Olympia. Though Becca, one of my favorite people, is there, the town itself drives me a little nuts. It’s been called the self-righteousness capital of the country and I wouldn’t disagree. I can do a great Olympia imitation using only the phrase, "That is so fucked up!"

The best example I can give is when I was driving a bunch of Olympians around at Yo-Yo-A-Go-Go one year, and a debate began raging as to whether or not a Dutch punk band* covering a political Hungarian folk song was culturally imperialist. "They’re not Hungarian. That is so fucked up!"

Upon entering the Oly Food Co-op on this visit, I saw a strange sign. It read, "Need a shirt to wear while you’re in the store? Just ask a staff person. We have some nice clean button downs in the back. Thank you from the Co-op Staff" What?

I immediately envisioned a sweat-stained and patchoulied Food Co-op shirt, stinking from the last hippie who wore it, possibly even still damp, and sealed in a plastic bag. I couldn’t help it even though the sign specifically said the customer shirts were clean. I asked Becca, who works there, what was up. Evidently it was a big problem for them. The women in the co-op felt like it was a gender issue because it was always guys who came in with no shirts and lame excuses.** The co-op men met and obtained plain work shirts to provide for in-store use.

I was almost speechless but not quite. Another Olympian and I started brainstorming better ideas for shirts than the current ones:

"How about one that says, ‘I didn’t wear a shirt to the Olympia Food Co-op’ on the front and ‘Need a backrub, Sister?’ on the back?

"A low-cut, best-dressed-breast shirt that laces up the sides."

"A ‘Try burning this one, Asshole!’ American flag shirt!"***

(And since my LJ friends are a smart bunch, I think you all should offer up other suggestions for shirts that I will then forward to my Oly Food Co-op friends.)

After much mocking over the course of many hours, including my accusations of co-dependency and enabling bad hippie male behavior, an exasperated Co-op worker said to me, "Well, what do you do when shirtless guys come into your shop?"

I loved this question because it implies that there’s really a problem. Like their store is the only grocery store in the country that requires shirts for shopping. My Oly friend knew exactly what I was going to say. At the same time we yelled, "Tell ‘em, ‘get the fuck out of the store!’"

*The Ex and Tom Cora "Scrabbling at the Lock": one of my favorite albums.

**My favorite lame hippie dude argument. "That policy seems really regressive. I thought this place was supposed to be progressive."

*** Actually that was suggested by Steve a few days later but I didn’t want to ruin the flow of the story.
Collapse